Would someone please send that nurse to charm school?

Since this is my place to whine (and you can't stop me!) i feel the need for a good whinge (British word meaning "to complain or protest, especially in an annoying or persistent manner." The Free Dictionary.)

i've spoken of the Chronically In Pain Clinic at Kaiser before. Previously i've dealt with a delightful R.N. who soooothes me and makes me feel like i might live. If she is cream, the other nurse is vinegar gone bad. She sounds bored when speaking to me on the phone. She does stuff like she did today where i was talking to her and saying "i really don't want opiates, they seem to have bad side effects for me--is there not something else the doctor can try that isn't an opiate?" Her answer was "well, they use Motrin." Her explanation being that the doctor is known for treating pain by getting a good level of opiates in a patient's system and keeping it that way. But what if said patient does not want said opiates in her system? Let's just say, they make parts of her system which should be on the move think they're doing a charade of the movie "The Day the Earth Stood Still." Not good.
i recognize i can be a bit of a babbler, so my hubby The Skimmer says. But i think i was just trying to give Nurse No Charm the important details to take back to the doctor. As i am saying, "call me back on the house phone," she suddenly says, "I'm hanging up." "Whaa?" i say, though i should be used to her Non Charming ways. "I'm hanging up now," she says, and laughs. "Oh." i say. What else does one say in that situation? i'm a nice person. i've know enough other people from the not-a-nice-person pool to recognize that i try hard to be kind and polite and such. The part of me that wanted to dip into that other pool wanted to say, "So sorry to bother you!" (or something equally junior high.) But the nice side won out.
i mean, isn't it her job to help get this settled to everybody's satisfaction? This cartoon i found today sums up my present state of being, given the fibromyalgia, the achy flu and snotty nose i have and the difficulty breathing that earned me a breathing treatment at the doctor's yesterday:

i am getting very close to grumpy. i realize i don't deserve special treatment, but how about just some good ol' fashioned kind treatment?
i feel somewhat pathetic, and perhaps spoiled by the people skills of the Nice Nurse. Perhaps i really am just the dog below-- 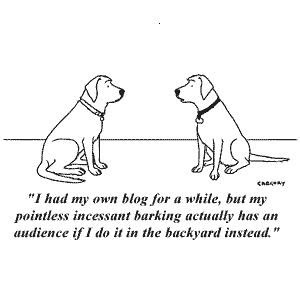 Oh it sucks to deal with people who don't care. The 15 advice nurses I spoke to about my miscarriage all said "I'm so sorry" the one that didn't got on my already sensitive nerves.

I'm actually very happy to see you wrote an entry today, I've been checking every day to see if you wrote something because I knew that if you did, you'd be feeling better. (Maybe not a whole lot better, but better enough to have motor control skills of your fingers.)

I hope you got my gift I left on your porch. If you didn't, you better yell at Dean or Jarel - they must have eaten it all...

Julia, I'm so sorry to hear you're not feeling well!! I wish you lots of rejuvenating rest and soothing foods. Take good care! I hope you'll be feeling better very, very soon.

Thanks, ladies, for the well wishes! And we have been enjoying the treats a LOT, thank you--love the comment about the motor control ;-)

That is unacceptable. It enrages me because I have tolerated too much nurse condescension being the kind and gentle person I am also. So I failed to get adequate medical attention for a while. But now I am starting to err on the side of assertive/aggressive. It seems to balance out just right for me. Don't give up.

mckenzi--thanks for the encouragement! i was just so shocked--i mean, she's a NURSE for a CHRONIC PAIN clinic! i guess i foolishly assumed she'd have some level of compassion!

It doesn't matter how many times I have come up against nurses like that. I am never prepared for the next one that I meet in what seems to be a steadily growing line of nasty BIs in nursing suits.

The shame is that it doesn't stop with the nursing profession. It seems as if more and more people wearing different hats and dealing with the public, should actually be in cages someplace.

hmmm...a cage. Hadn't thought of that. i wonder how big she is? i'm gonna be over there in April for the I'm Chronically In Pain class, and maybe i'll bring a cage in which she can sit in her own I'm Chronically A Pain class.