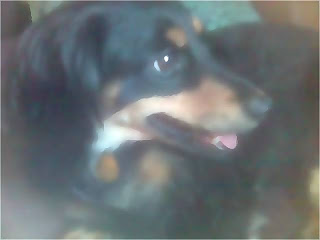 Oliver is my grandpuppy. We're watching him while daughter Cori is on vacation. He was a rescue doggy when she got him 4 years ago, and he still has some "issues." He's a bit skittish, he's a bit distrustful, but he is a small, fluffy delight nonetheless.

And he does love his walks! Corinne walks him regularly. They live in an apartment in a family neighborhood with tree lined streets and real sidewalks. We live in an unincorporated area, which translates to some concrete sidewalks, some dirt walks, some pebble covered walks. But Oliver doesn't care, he just loves his walks, whatever the surface.

He and i have gone for a couple of walks since he's been at our house--this morning was one of them. i pulled on some clothes and tennis shoes, did nothing to my hair (to be honest, at 6:30 a.m. i barely remember i have hair) and got out his leash. Our other dear left-behind dogs had a howling fit, but i was only taking Oliver. We were out the door around 7, a practically unheard of time for me. i don't really care for hours in the morning that start with 5's, 6's, or 7's. But i was awake, and it seemed like a good idea at the time.

As we headed down the street toward the corner market, delivery men were busy with their trucks and coffees and conversations. One of them cheerfully waved and said, "So, he got you up for an early walk, eh?" He was obviously One Of Those. You know the type--probably opens the blinds and talks when he gets up in the morning. A Morning Person. i have a daughter like that. It just isn't right.

i tore my gaze from his cup of coffee and managed something to the effect of, "Yeh, he does love his walks..." We rounded the corner, the sound of their extremely animated morning conversation still in the air.

This is the way i figure it--in order for me to walk for at least 30 minutes, i have to walk so that i am at a point of no return by 15 minutes. That way there's no wimping out, once i'm 15 minutes away from home, it has to take me another 15 to return. No shortcuts, no, excuses.

So, on my way home (which by the way ended up taking me a full 40 minutes total) a thought occurred to me. When i was giving Oliver a bath, he didn't do like my dogs do and try to climb out of the tub, he didn't shake the soap all over the room, he just took on a resigned look. An "I will endure" look. And just did it. He doesn't love his baths, but he doesn't fight them. He just does it because otherwise nobody wants to be near "his stinky self" as my daughter puts it.

Somehow that makes it seem more manageable to me, because if i wait to love it, it's never gonna happen.
Posted by julia at 9:03 AM