April is a busy birthday month for our family. We started out celebrating Dean's birthday at Pyzano's, a local and excellent pizza place. Various among us tried to channel the birthday boy's mustache--although we should have added some pizza flour to make the color more realistic. 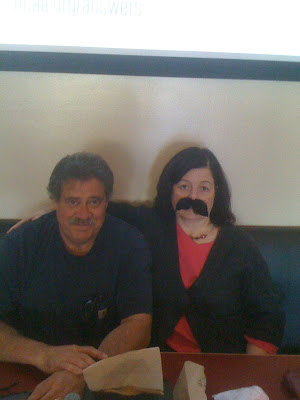 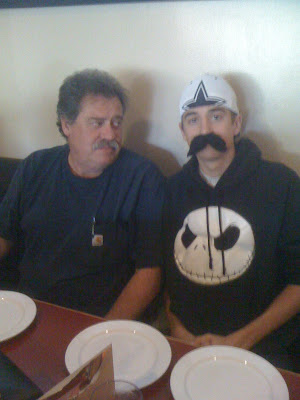 though grandson Trevor looks pretty darn Mario-like in it. (i can hear the music playing now!) 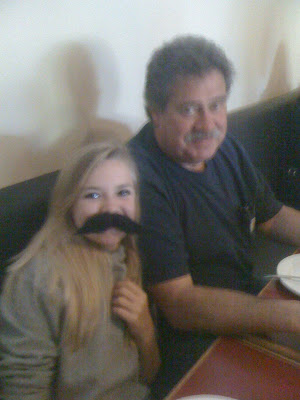 Granddaughter Haley definitely gets the "cutest girl in a 'stache" vote.
Below is Cori and Luis' place--i love it! (Plus they're much tidier than i have ever been.) It's a Craftsman bungalow with built-ins, like the china cabinet you can see behind the table. The tablecloth is an old one from my side of the family and looks perfect in their place on the antique table they bought when they moved in. 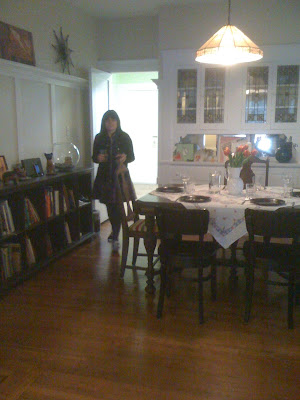 Why the photos? This lovely meal was cooked by Cori and Luis for Luis' 30th birthday celebration. And have i mentioned (a million times, maybe?) that he's the executive chef for Mamacita, an upscale Mexican restaurant in San Francisco? 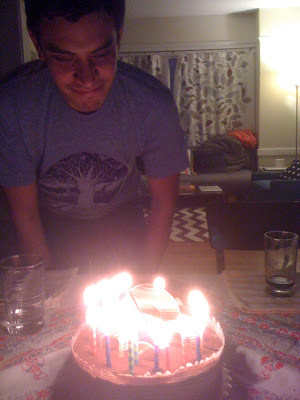 It was great--chicken breasts (from quite well-endowed chickens,) asparagus risotto, and an arugula and strawberry salad. Mmmmm. Topped off by a chocolate cake. And good wine. Here's to many more of their birthdays where they cook!!

Then we moved onto Jarel's 22nd birthday-- 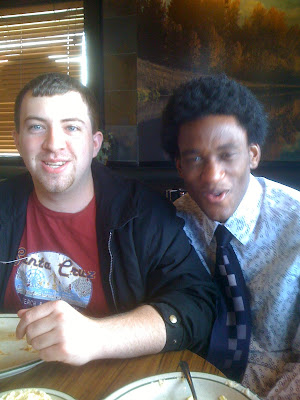 This is Jarel with friend David, horsing around at his birthday breakfast. He had a great party with a lot of his friends at the house, and an adorable dinosaur cake from Costco that his mommy picked out. :-)

Somewhere in the midst of all this, the Danville Grandgirls took me on a whirlwind shopping and bowling tour. i was consistently 6 steps behind--Cassidy almost left the shoe store with two different size shoes (way to go Grandma!) but we were saved by the observant clerk. 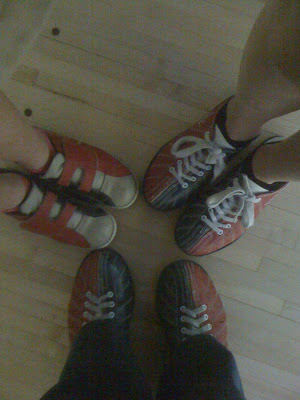 Grandma again experienced being more steps behind as i was beat by Haley in two consecutive games, topped off by a boy about Haley's age who was there with his family, asking my 12 year old granddaughter for her phone number without me noticing. Let's just say Grandma is out of practice!


OH! How could i have forgotten to mention the birthday of GrandBrit Elias tomorrow? He's 7!
Posted by julia at 3:35 PM

Loved seeing the pictures. The one with you and a mustache was quite charming! Cori's place looks so cute.

Sorry that the blogspot gods are not happy with me and refuse to align my lines toward the bottom.

i love Cori's place and their sense of style. And yes, i did draw some attention at the pizza place. :-)

when we saw the photos on Facebook my mom and I started with the Mario music....lol You looked the best in the "stache".... here is to many more buys months that don't wear you out "too" much :)