The softer side of SWAT. 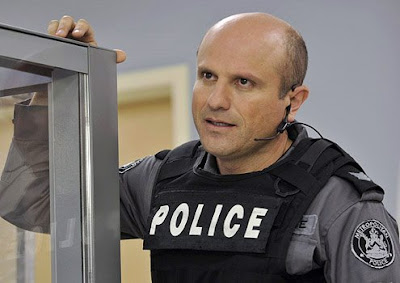 First there's my dear friend Equichick8 and her totally enjoyable family from Manitoba, then came Corner Gas--introduced to me by my Canadian friend. Hubby and i have become quite addicted. It's light, it's funny, one of those things that makes me laugh out loud. Now there's Flashpoint, the new Canadian series on CBS. Here's the write-up from AOL television:
Inspired by the real-life Emergency Task Force of Toronto, Ontario, Canada, this taut police drama chronicles the efforts of the Strategic Response Unit (SRU), an elite and highly skilled group of cops charged with rescuing hostages, defusing bombs and breaking up gangs. The series title comes from another part of their job, however: getting inside a suspect's head and discoverying his emotional "flashpoint" that triggered the crisis in the first place.
i wanted to see this because i love the actor Enrico Colantoni--most recently seen as the father on Veronica Mars, the show where one could gain satisfaction from watching the cute high school outcast say all the things you always wish you'd said.
The curious bit to hubby and i in Flashpoint is the extremely sensitive overtones to the show about hard hitting SWAT team members as they go through their daily business of catching bad guys and saving lives. Now, SWAT and sensitive don't seem to readily go together in my brain, but who knows? Maybe SWAT teams regularly have the touching moments as shown on Flashpoint. Now, i do love Colantoni, but this jury is still out on the subject of the softer side of SWAT. But Corner Gas is here to stay.
.

Oh my goodness! I heard about Corner Gas, and while intrigued by the title, I sort of dismissed it as being something I probably wouldn't be interested in. THANK YOU for describing the subject matter..I have a feeling I'll love it! It's so good to "see" you...back to catching up on your blog.

Look at the awards Corner Gas has gotten! I misread the post and thought Corner Gas was about SWAT. Now I see it's Flashpoint - oh well, two new shows of interest...just what I need...more TV. LOL :) Anyhow I can't believe the awards!
http://www.cornergas.com/about/

I don't usually accept the responsibility for the remote. I always tell JD that it more responsibility than I am willing to take on. One night though he was on the computer and I found myself in charge of "THE REMOTE" and clicked it over to corner gas. Am I mistaken or is one of the charactors played by the same little fella that played Radar on Mash? Since then the Handler of the Remote has taken back his responsiblity and we watch some other channel. We do watch Flashpoint faithfully.

Hey, Hinsley!!! Yep, we're lovin' Corner Gas, and i hadn't known how many awards it had gotten till i looked at the page you mentioned. Ya gotta watch it.

Jo! Corner Gas is worth having a look at, for sure--so you guys like Flashpoint? Tell JD he needs to give Corner Gas a go too. ;-) And the Hank character is similar to Radar! but i imagine Radar is getting to be 60ish by now--altho i myself have not aged, so possibly he hasn't either.

We have also been watching Flashpoint and enjoying it. Enrico Colantini is one of those actors we love and when we see him in a show we say "There's that guy we like- this is probably a good show. Remember that other show he was in that we liked? :-) I have to admit Corner Gas was not even on my radar and I had to go look at our local listings and there it is on my cable lineup Wed. night. Just not on my radar. I'll be watching tommorrow night- unless I can't tear myself away from the Olympics! Thanks!

Okay, so Flashpoint was on last night during the Olympics--the women's gymnastics, at that--and I decided to give it a try--quite good, I must admit! And what's wrong w/ them having a soft side, anyway?

I don't know when/where "Corner Gas" is on--can you give me help w/ this?

Oh THAT's who that guy was - Veronica Mars' DAD! I liked that show - thought it was brand new. Huh. Corner gas, well, I don't know when that's on, but I'd give it a try for you. (unless, of course, it competes with another favorite!!)

Flashpoint is new--definitely seems to be catching on! And i'll have to look at when Corner Gas is on, we Tivo everything, and that keeps me from knowing those details...

Lea Ann, Colantini has that effect on me too--i'd forgotten he was in that David Spade show i can't remember the name of--did you watch that?

and Limbo, SWAT is allowed to have however many sides they want, even an "I take bubble baths" side--just the sensitive one isn't usually what's portrayed. ;-)

Yes, we did watch "Just Shoot Me" years ago. Missed out on Veronica Mars tho. We've seen Enrico in guest slots on lots of shows we watch - Brother and Sisters, Numb3rs, CSI and Law and Order. Forgot to watch Corner Gas because of the Olympics last week, but will be on the lookout for it this Wed!

I have to say, in the past Canadian shows have left much to be desired. Any sort of drama played on channel 6 (CBC) in Canada left you trying to swallow the disbelief lump in your throat. But I grew up with this, and it was normal. We always knew US shows were more believable, but then you run across these exceptional shows/tv movies: Anne of GG and Corner Gas. (Note the very big time gap between those two). And my siblings and I would say to ourselves "hey! This is really good!"

I suspect the misgivings about Flashpoint having a weird, sensitive side is really only the result of it being Canadian. They do weird things there. Like eat ketchup flavored chips.