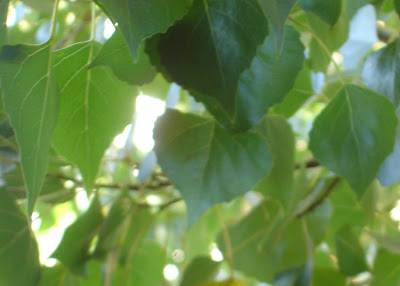 poplar tree in our backyard

i've been having some good mornings lately.

i say this because i've never really been a morning person, but morning has been less friendly with the fibromyalgia. If you've read this blog before, you probably remember that i've whined heartily about the Fentanyl withdrawals and the fact of that experience leaving me with even less energy than before.

But changes seem to be in the wind--i've taken adrenal support supplements for a few months, and am now on Cymbalta, the pharmaceutical recently proclaimed on commercials as the answer to my fibro pain. We shall see how it goes, but whether from the time passed from initial withdrawals till now, or the adrenal improvement or the Cymbalta, i'm finally able to wake up at a decent hour and get out of bed! (By "decent" i refer to hours starting at 7, not the indecent time my hubby gets up-- 4:20am.)

The simple act of being able to wake up and get up is one i haven't been in touch with for a while. The fibromyalgia, diagnosed about 3 1/2 years ago, has changed my usual world of "i really don't want to get up" into "i feel really exhausted still and i'm too sore to move anyhow, so i really don't want to get up." They're simply different by degrees--did i mention i've never been a morning person??!

The extra good part of mornings lately is that in this end of a Castro Valley August, the weather is clear and even on the hot days the mornings are lovely and breezy. The balcony outside our second floor bedroom invites me to sit and listen. 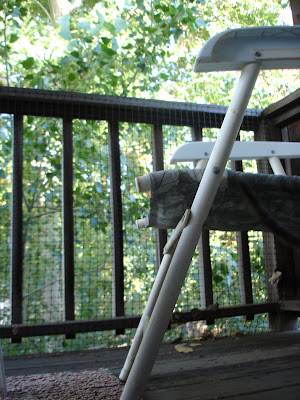 i am a lucky girl. (Okay, a seriously over 50 girl, but still...) When our second floor was added and the balcony made, it had no covering over top. Me, being the delicate flower that i am, suggested that protection from the elements would be good. Dear hubby did that. So now i have a lovely treehouse nestled in the branches of the poplar tree, or so it seems.

Do you notice the sounds of morning are different than later in the day? And the sounds carry through the air differently in the summer? My nest asks me to shhhh and listen.....the constant soft swishing of the traffic on the freeway a mile away, the rhythmic thrum of my bedroom ceiling fan...the workman's tools two doors down...the rustling of the poplar tree's leaves. Listening has become a calming practice of feeling outside my own body and its pain, of being strictly in that moment, a meditation of sorts.

Skimmer's recap: Not a morning person. Mornings improving. Good morning to me.
Posted by julia at 7:50 PM

Glad you are able to get up and enjoy those wonderful morning sounds. As of lately the pain has been very real for me and the days have not been starting until seriously after 9 most mornings and then it is with protest. Even blogging has been a chore lately. Have a Rheumy appt tomorrow so we will see what changes will take place this trip. I get so tired of being the guinnea pig.
Big hugs atcha.

I never knew you were not an a.m. person.I must have missed that in your posts. Tell me, though, do you go to bed at night at a decent hour, as in before midnight? I love to stay up till 2am as my brain starts to work -- real well, as a matter of fact. I don't know my name in the morning.
I am happy for you and your new morning sounds. Whole new world out there, huh ?
I think you seem to be on the right path -- keep up the good work.

HA! HA! Whatever c first wrote got removed so s/he got mad and put a more acceptable one, making it quite weak and stupid, IMHO. ANYway, imagine the sounds if you sat in your porch swing w/ the windchimes going? AAAHHHHH! I am jealous, just thinking of it....and congrats on the earlier mornings. I personally got up at 10:30 today, the MOST acceptable time for early morning.

yep, my limbo friend, the back porch swing and the windchimes are quite lovely too--but at least i can still hear the chimes on the upstairs balcony!

i think the "c" comment was in reference to an accidental posting of connie's comment twice--don't know why that would be an issue, but anyway i just deleted the second one. Whatever!