The sound of silence...

i was checking my email, the sounds of Peppa Pig playing in the background. Little Euan loves Peppa Pig, and if you listen to the characters on the website, you'll hear how the children's voices sound here with their lovely little accents. :-)
Anyway, Euan was stretched out on the couch watching a Peppa dvd, enjoying his juice. He's a pretty quiet guy most of the time, going to Mummy off and on for a cuddle, asking the occasional question. When Elias is home, it's full speed ahead. Euan of course wants to be everything big brother is, do everything big brother does, and they are constant busy-ness together. While Elias is at school it's a different house altogether--not better, but definitely quieter.
All that to say--i was checking my email, sitting on the floor of the living room with my back up against a chair. All was quiet except for the sounds of Peppa. With just Euan home, this isn't an unusual sound, that of *quiet*. After some time i looked over at Euan, and this is what i saw: 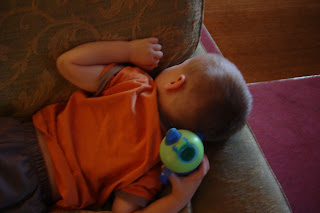 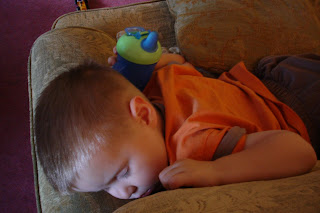 ...his hand still clutching his now empty juice drink, completely and absolutely surrendered to a parent's best friend, "Sleep." Is there anything sweeter than the face of a sleeping child? Maybe the sound of their laughter, but who could not love this sight?

i was telling Shawn that the way i see her children, at least in the American description of them, would be: Elias could be President. He's inquisitive, he's an absolute bulldog about something he wants, he's on the move and unstoppable. Euan, on the other hand--he would be the one who wants to facilitate the success of his big brother. "That was a great speech! You look great in that suit. Can I get you a cup of tea?" The loving, adoring younger brother.
i can't wait to see what the next child will be like! These children are amazing, and brilliant, and adorable, each their own unique person. i love this about both sets of grandkids, Candie's and Shawn's, they've been allowed to show their individual personalities. In some cases, be it fortunate or unfortunate, they've developed a bit of their parents' sense of humor. (Senses of humor? Sense of humors? Whatever.) i don't know if it's a matter of the childraising styles of today, or if it's just what happens when parents follow a more intuitive style of parenting, but i love that this present generation of little people is able to learn respect and manners while still being allowed to be their own inquisitive/mellow/busy/gentle/funny self.
For instance, that little cutie Elias, my 4 year old grandBrit--i was knitting on the baby blanket project i brought with me to finish for the new baby. Every time for the first few days he would see me knitting and say, "Grandma Julie--nice baby blankie," and give me his little grin. i love 4 year old humor. Because of it we've pretended to suck up the furniture in the vacuum, and shop the aisles of the grocery store with the car. But speaking of the blanket, i've now finished it!! Here's a photo-- 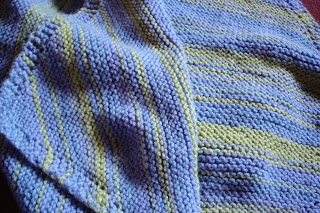 You can't really tell from this photo, but it's lime green, blue and a purple-ish color. You can guess from this that i figured the new baby would likely be another boy, BUT, as Plan B, in the case of a girl, i have a long pink yarn chain to weave in and out of the edging of the blanket. And Wednesday morning, we shall see: pink, or no pink?
Posted by julia at 6:46 AM

Wonderful posting.... I could feel the quiet.

I loved the pictures of that sweet sleeping grandboy, and it was fun to see the blankie!

Well, its 4am your time - I wonder when she goes in?

It's just me again Margaret..... Patiently waiting for news of that new Grandbaby.