Once upon a time, on the first day of Spring...

a boy and a girl were married. 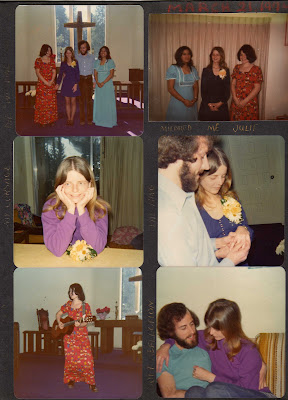 From the day the Boy had first seen her, he knew she was The One. So exactly 2 years after they first formed their household union, they were to make it a permanent one with signatures and flowers and a solemn ceremony.

This ceremony was to take place high in the majestic mountains of the magical faraway land where they lived called "Vail Colorado." There was snow in its mountains, even on the first day of Spring, and the Holy Man who would perform their ceremony was out in that snow performing a different sort of ceremony with 2 poles and 2 flat pieces of wood. His Holy Watch was apparently broken, causing him to rush in late wearing muddy boots.

The Boy, the Girl, a friend named Mildred and the Girl's young and beautiful sister all passed secret smiles amongst themselves on observing the man's muddy footwear, it being irregular indeed to wear such attire to perform this solemn ceremony, and didst bring them a chuckle.

The Girl's younger sister with the naturally occurring dark hair played a stringed instrument and sang a moving ballad to the young couple. The Holy Man attempted to lead the ceremonial participants in a recitation of the Lord's Prayer. Again they passed secret smiles amongst themselves while mouthing words that may or may not have been correct, as the raven-haired sister of immense beauty was the only person besides the Holy Man familiar with the words. And didst I mention she sang like an angel?

In time the Boy grew into a Man, knowing all the more surely that, indeed, she was The One.Their union was strong, unusual in the fickle and self-serving times in which they lived. Their time lasted into 4 decades,  cut short only by her untimely death. The Man and the now unnaturally raven-haired sister still grieve, but as they share the story of The Old Days and the Holy Man of the muddy boots, and of the first day of Spring all those decades before,


Skimmer's Recap: Canst thou tell who the young sister may have been? The Girl Bride was actually the pretty one, but she would have found the shameless younger sister's telling of this story amusing.
(Hi Keith! i love you!)