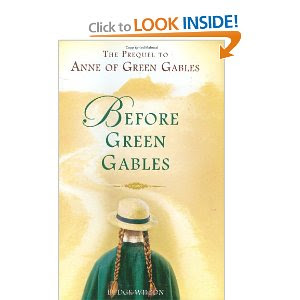 I've been reading the book "Before Green Gables" by Budge Wilson for book club. If you're at all familiar with the Anne of Green Gables character in the books by L. M. Montgomery, you'll probably know that her story begins as a twelve-year-old orphan girl who is accidentally placed with Matthew and Marilla Cuthbert at Green Gables when they had requested a boy to help on the farm. Her unique, imaginative wonderfulness ends up endearing her to them and they decide to keep her after all.

According to the acknowledgements in the book, the senior editor at Penguin books wanted the woman oddly (or interestingly) named "Budge" to write a prequel to the Anne books, answering a big question of mine: "What would possess someone to mess with my favorite book series of all time??" The voice of the writing is fairly similar to that of Lucy Maud Montgomery's, helping to fit this book into the series somewhat seamlessly. After I got over my initial annoyance that someone would decide to fill in the early years spoken of in the Anne books, I've actually enjoyed it.

"Enjoyed" may not be the best word, since it's brought up a lot of my own feelings of "orphan-ness." The irrepressable Anne Shirley lost her parents to illness when she was a baby, then spent her next years as an unpaid servant to two different families with many children, being forced to earn her keep by washing diapers, preparing dinner, and watching the younger children from an age at which most of us were still sucking our thumbs. She keeps from losing all hope of goodness in the world by imagining better and happier worlds.

My Favorite Mental Health Professional, Stephanie-the-therapist, told me that grief can stir up our old hurts. Since my sister's death in March I've been living that out. The Anne books give a whisper of her early trials, but the Prequel revels in fleshing those trials out--while showing how she maintains her hopeful nature. All that flesh is tough to see (I'm pretty modest.) And it's reminded me of the "mama-shaped-hole" in the middle of me, though I lack the awesomeness of Anne to compensate for it as she does (but then, she is fictional. But awesome.)

Be assured, this isn't meant to be a "poor me!" post, it's just a (really long) statement of the feelings the book has stirred in me. I've had people play the "I had it worse" game with me before, such as when one acquaintance said to me while bemoaning her absent father, "Well at least you HAD a father!" I refrained from speaking the thoughts in my head which ran something like this: "Ah yes, a father who when drunk might pull out his gun and hold us hostage on the living room couch threatening that he could 'put us all in the ground,' or who had a thing for handling my older sister in ways a daughter should never be handled. Yes, good ol' dad!" Instead I merely clamped my jaw shut and grimaced the pretense of a smile. I'm not trying to "one-up" anyone here, or invite you to my pity party, as I am fully capable of carrying that on by myself.

When I was young and I'd be home from school because I was sick, I loved that my mother would put a chair by my bed or the couch to put my book and water on, and she'd let me use the Special Blanket her mother had given her, made of yellow flowered fabric that felt like a entire blanket of satin binding. This for me was "love" and "nurture." Not to be mean, but she didn't enjoy giving of herself, so the nurturing was in things. But I missed out on the actual person.

BUT, both parents were creative, and my sister and I learned that from them. There are always positives to be found by those of us foolish enough to be optimistic while face to face with flesh-eating zombies ("well maybe I'll finally lose these hips!") And I am a Big Girl and know that Life Is About Choices--the choices I make every day in what I do, or who I choose to be.

I guess all that to say this: "Before Green Gables" has made me look again at the Mama-shaped-hole in me, the part of me that wishes she had a nurturing mama to cry to, to help mourn the too-early loss of Patti. That need seems to have stuck with me my entire life, but the recent sadness and then reading the story of unloved Anne has pushed it into visibility. Trust me, I hate that I'm an adult of 58 and can still feel that pain at times. Blecch. Grief is hateful. But neccessary (or so They tell me.)

SO MAMAS, love your babies and children, kiss on 'em and tell them how special they are to you simply because they're alive. Enjoy them, even when they're loud and driving you crazy making popping noises with their mouth non-stop (like a certain son I just might have.) Build that strong place in the middle of them, that warm mama-shaped love place that sticks with them even when they're 58.

And if you love the Anne of Green Gables books, and don't cry like a big baby over sad stories, read the book. It does manage to capture Anne's spirit (she admits begrudgingly.)