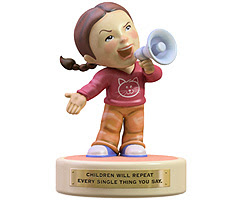 Life's just full of little lessons--for instance, the TLC Channel "Life Lessons" figurine that reminds us that children learn from us, and will repeat every single thing you say--usually at the most inappropriate moment.

Here's another: do you know somebody who has to one-up your pain? You know, when you just want to have a good gripe but they keep telling you what they have that's worse? Yep, fine, you want to tell them, You win in the 'Sucks to be you' contest of life, but dang it, i still need some air time!

You know that internal dialogue, the one where you're really hoping it's "that still small voice" generally associated with God, and not just *you * upping the Crazy Quotient of the family tree? Well, like i said as i closed an earlier gripe-post, there's stuff i can do with fibromyalgia but not with a cast, and vice-versa. It's the first category i'm honing in on here.

It's like the Still Small Voice is saying, "well, look--you used to be able to do that with fibromyalgia--oh, and that--" (Here the Still Small Voice gets the tiniest bit cheerfully sarcastic, which is part of why i worry that possibly, just possibly, it's really that family tree business i mentioned earlier rather than God--) "Hmmm....So, do you think that maybe there are things that are more limiting than fibromyalgia? And that you should be thinking of what you can do with the fibro rather than what you can't?" Yeh, whatever.

So, life's little interruptions may not always be the End All they seem at the time, as much as i hate to admit that. It's so satisfying to have the occasional whinge, and i've always been one to tell someone "Your pain is your pain" and isn't less simply because someone else has it worse. But how can i have a really good whinge about the fibro with that cheerful Still Small Voice in my head pointing out that it could be worse? i mean, it's not as if i can't drive and get out of the house or something--Oh wait, 2 more weeks in this cast. Dang.

Life's Interruptions/Life's Lessons. They seem to have a connection. i hate when that happens.
Posted by julia at 10:33 PM

wow, I can identify with a lot of what you're saying here. I used to work with one of those "one uppers." You wanna tell them it's not about them! I just got to the point that I stopped griping to her. Maybe that's what she wanted. ;) Meanwhile, I'm busy learning one life lesson after another here in my neck of the woods. I seem to be learning them all the hard way. I really don't think there's an easy way to learn any of it. Two more weeks ... I hope you don't have to learn too many more lessons while you wait for the 2 weeks to come to a close! :)

So how are you holding up, Tersie, with all the lessons?

I'm learning that the most important thing is love. It's more important than housework or yardwork or paying the bills. They will still be there. But I've got to be sure to have the time and strength to show my kids how much I love them. They're most important to me right now. Oh, I still want to get all the other things done too. I always seem to be getting lessons in patience. That's a tough one for me to learn. I'm learning a lot about myself. I'm stronger, smarter and much more captivating and interesting than I ever gave myself credit for being. And you know what? That's not all my fault. Nobody ever really clued me in on how great I am. Not that I'm bragging on myself, don't get me wrong. I was just the last one to believe that I had ANY of those qualities. I'm proving to myself that I was quite wrong! That's a good lesson to learn. :)

Thanks so much for asking!

Danged hard way to learn all that though! i know what you mean about learning about yourself--for the longest time i had my parents' voices battling in my brain with my own, to the point i felt pretty crazy. The stuff i thought about myself as spoken by the parental voices didn't fit with either what the Bible said about me or i thought about myself--it's pretty hard sometimes to redirect that inner brain traffic! Glad you are coming to terms with the person you really are. ;-)