Adventures in blogging and shopping.

It's been fun hearing back from people about my Adventure In Blogging. Of course one of the comments was, "You didn't write very much." i believe that one came from my husband--who apparently was surprised by my brevity, given my total lack of it in conversations with him. 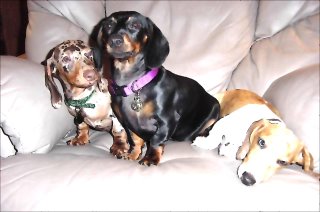 my rose photo--i'm so excited about my roses! i can't believe that * I * acually bought a rosebush, planted it, watered it, and have these gorgeous "Gingersnap" roses. i'm pretty much a gardening reject. My lovely (at least in theory) lilac bush, alas, didn't make it. And as with the rosebush, i purchased, i planted, i even remembered to water the lilac bush, but, * sigh *.... Pretty much i stick to growing geraniums, lots and LOTS of geraniums, since they grow so easily here in mild-wintered SF Bay Area that i think our dachshunds could probably grow 'em. (see "the boys" above.)

Other stuff of the day--i thought i'd try my hand at doing some work through a temp agency my good friend works with--but none of that "full time temp to hire" stuff that she's doing, oh no, i want to be someone that floats through a place, leaving well organized files and awestruck workers in my wake--sort of an office Mary Poppins, floating in with my umbrella and carpetbag to save the day.

ANYway, since i was meeting with the temp agency today and i've been out of the workforce for nearly 4 years, i thought maybe i should try to buy something appropriately interview-ish. And FINE, i know i'm curvy in a very "not of this century" way, but why do clothing manufacturers need to rub it in? "Yes, we know you are larger than the people who shop in the cute clothes sections, but just in case you weren't aware of that fact, we're going to use X's to call your clothing 'Extra Large'. Oh, and 'Extra EXTRA Large.' And then if you don't feel bad enough yet, 'Extra EXTRA EXTRA Large'." Whose stupid idea was that?? Some tiny little Size 2 woman with the metabolism of a hummingbird? (i just looked that up--a hummingbird can eat 1 1/2 to 3 times their weight in insects and nectar in a day--so much for "eating like a bird", eh?)

No business attire in hand, i took my new sunglasses and new underwear to the cashier. (That's close to "interview clothes," right?) The clerk looked up from ringing up my lavender undies and said, "Lingerie is 'final sale', no returns." i looked at her, startled, and said "i hope so!" i mean, that would just be gross.

i met with the temp agency woman, a very nice lady who tried to put me at ease (too late!) and took a few tests--Word, Excel, keyboarding--(i remember when i thought it would be the coolest thing to have a "portable word processor" the size of an apple crate. Woohoo. And now my purse is bigger than a lot of computers.) That job stuff all went reasonably well. We'll see what happens from here. But i thought doing some stuff a few days here and there, a week now and then, would be a good way to try out how well fibromyalgia and i do in the workplace. i know there are loads of people out there with fibromyalgia and much worse still doing full time jobs, but some days it's a challenge just getting up from a chair or out of a car--or even dress myself.

i know the fibromyalgia doesn't define me as a person, there is a lot more to me than that (i'm talking skills and interests here, not those nasty aforementioned "X's.") The thing is, the fibro does seem to define some of my limits of the moment... But the dead plants, that's all on me.
Posted by julia at 8:49 PM

That's so funny about no returns for underwear! Good luck with your temp work- I'm glad to see you are sticking your toes into the water again slowly to see if you can handle working. Take care of yourself and I'll be thinking about you! Mounceypoo