Fibromyalgia and the Gym: Things I've Noticed Besides People in Spandex. 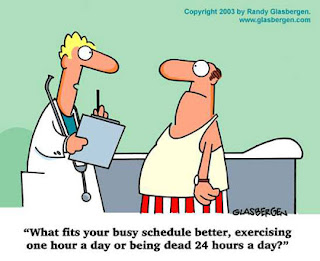 I have passed the three month mark in my Experiment In Fitness. I started back at the gym in mid-February, and started seeing a naturopathic doctor about the same time. My trainer at the gym has kept me from hurting myself and my naturopathic doctor has supplemented me toward better energy. These are the things I have noticed:

At the gym I can now add light hand weights to my routines. I have better control of the movements my trainer guides me through. I now have to warm up at a faster pace on the treadmill than I did originally in order to start moving my heartrate up, and I've upped my pace on the treadmill altogether from 3 miles an hour to 3.3 miles an hour and added an incline to keep my heartrate in the workout zone. Doesn't sound like much, but it's a change in the right direction, right?

I sleep better and on less medication than I needed for a night's sleep than before. I wake up less groggy. I am better able to do sustained activity than I was previously. I don't see a huge difference, but my dear hubby says it's significant.

Due probably to both supplements and exercise, my flares have been minimal. Where previously I could expect one week out of 4 to be extra fibro-achy and difficult, I've had only a few days in the whole 3 months. This to me, a whiner from way back, is huge. I think it may be even huge-er to my family.

One reason I started this trip down Supplement-and-Exercise Lane was the thought: In a year from now, what could be different about my health and fibromyalgia? A year will pass one way or the other, so why not DO something?

I've had a number of people tell me that either they or a friend had fibromyalgia "and one day it just went away." I'm not sure if that is intended to encourage me (it doesn't, by the way) but rather than wait around and hope for a cure by The-Raw-Foods-Diet/Prayer/Misdiagnosis or Magic, it seemed prudent to take some steps of my own. And what do you know? The steps are moving me forward.

Where I felt "stuck" in the quicksand of this thing called Fibromyalgia, I'm feeling a bit more in control. What is your area of "stuck-ness"? What choices could you make to improve some part of your life that otherwise will be just the same a year from now?


Skimmer's Recap: Julie finds no magic in her past 3 months, just some serious acts of the will--but finds them oddly satisfying. However, she does not anticipate wearing spandex any time soon. Or ever.
Posted by julia at 10:52 PM

This is really interesting to me and I can totally relate. I haven't had the strength to get into working out yet, but I know it's needed and am just trying to get things under control so I can give it a shot.

If you feel like sharing what supplements are helping to support you, I'd love to hear. I take plenty (and I'm not trying to sell any) but it still feels like my body is "missing something". I just feel SO weak.

No problem, Nancy--i'm glad to share! i was taking supplements too, but when i started with the naturopathic doctor she added, subtracted, and multiplied. :-)
She likes the better quality ones, and her favorite brands seem to be Thorne and Integrative Therapeutics, but there are other good quality brands out there. i can find the ones she likes on Amazon.

She has me on a good Omega 3, at 2 3 times a day; B complex 1 3 times a day; magnesium citrate 1 3 times a day. i take a daily vitamin and was already taking a calcium/magnesium/zinc supplement at night, and lately because of muscle cramping she added 1 to 2 additional magnesium citrate to that. Magnesium is one thing we with fibro have a big shortage of. The 3 daily ones are all with food. She also has me taking Thorne's Adrenal Stress End, which is made of pig adrenals, and that's 2 in the morning before food.

if you have a chance to read some of my other recent posts (which i should have added as links to this one!) i explain the fun test that got me on the pig adrenals in the first place. :-)

Some energy issues can be in our hormonal imbalance, so i'm also using a progesterone cream twice a day (3 weeks on, 1 off.) Plus i think i just got fed up with nothing changing, so BABY STEPS!

i'm still working on getting rid of sugar. i'm pretty much caffeine free now--maybe a cup a week. Those were 2 more things she makes a big point of.

Trust me, I FEEL YOUR PAIN!! hang in there, eh?