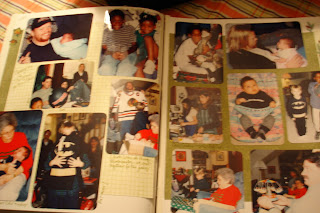 For years i've collected scrapbooking goodies: papers, stickers, alphabets, tools. . . oh, and rubber stamps and inks and pens, and scissors that make cool edges. And paper punches in shapes. And glues and tapes. But for years i hadn't done anything with all the stuff except for collect it. Once upon a time, pretty much in the stone ages of scrapbooking when there were only pens and solid colored papers and maybe a punch or two, i started scrapbooking. Not unlike many things in my life, including a hand-stitched quilt i started for my oldest when she was 8 and finished (on the machine) for her 18th birthday, after an initial burst of energetic scrapbooking, my supplies sat idly in their containers.
i think in a way i was afraid to attack the scrapbooking of our millions of photos. When i started scrapbooking back in the day, it was a simple thing. When i started thinking i'd like to get started again, i took a walk through a local scrapbooking and rubber stamping store, California Stampin'. OH MY. Miles of stickers and papers and embellishments (a word i had not previously known) filled the aisles. More miles of pens and glitters and chalks and endless colored ink pads filled a few more aisles. Magazines and books on scrapbooking and card making filled an entire wall. Overload!
If only i did not like taking pictures so much--and if i had not had children who had then given me grandchildren, or gone on vacations, i would not have so many photos to organize. But i attacked the organization of said photos, cleared myself a space to work, and stared blankly. Organized photos, organized supplies, and no ideas for moving forward.
Between seeing the themed (non-chronological) albums of an Alabama cousin, and finding the magazine named (perfectly for me) Simple Scrapbooks, i began actually using some of my long-hoarded supplies!!! i was on fire!! i made a heritage album of old photos from my husband's side of the family, and then one titled "What I Did On My Summer Vacation" for last year's vacation photos (with room for more,) and an entire Hawaii album for our 30th anniversary trip. Now i've attacked my chronological family photos once again--i'm trying to make my way out of the 90's, having just finished 1997 yesterday evening with Scrubs as background noise.
So if you feel i have disappeared from sight, i've only gone as far as the 90's. i'll try to be back before the Y2K bug hits.
Posted by julia at 10:57 PM